The history of Alexandra Palace and its ambition to create a place for the people to enjoy themselves is fascinating and has been a novelty. Interestingly the opening of the Palace happened in Victorian times when entertainment for the people has been addressed on many levels such as the gaining popularity of illusionists. Equally there was a desire to create scenery of “virtual” reality where people could enter a world created by imagery that resembled the real world. We liked the idea of capturing and exploring this notion of illusion and imagination.

The projects consist of fragmented pieces of the original Village on Stilts that will be placed seemingly randomly in different scales, somewhere between a model and a real size structure. The visitor explore the abstract piece from different angles, a weirdly beautiful yet chaotic ensemble that forms itself into a 3 dimensional Image, recreating a drawing, the only record we have of the original Village.

The theatrical and performative notion is enhanced by creating a sound piece that evolves around poems and other texts on illusion and perception of reality. The perception of the sound itself is equally fragmented along the path, only projecting single words/phrases/sounds. In the one point which allows the ‘full picture’ of the village to be experienced also the isolated sounds are magically coming together to be heard as the full piece. 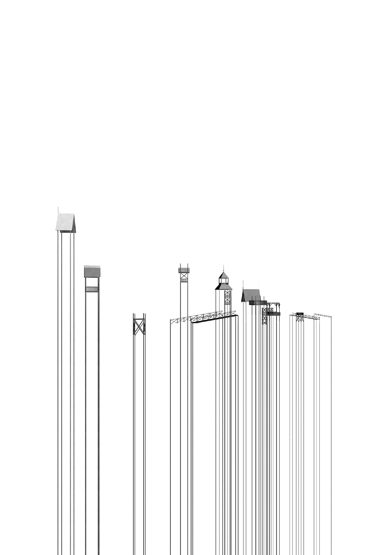