A parking lot located on the Benjamin Franklin Village, a former American Military Barrack, is converted into a multi-functional Public Space.

The space is dominated by one material, the asphalt, that becomes the central element of the design.
The idea is to cut out the existing surface by framing the existing graphic elements as independent icons. The cut outs are used to and re-arrange the space and make room for other features, enhancing the contrast between the sealed and unsealed parts. Usually stigmatised, the asphalt is seen as a positive element. It also symbolises a material that is central to new American sports such as street-ball and skateboarding, sports that have been introduced to the German Culture by the Americans. All the cut outs (openings) are left natural to create a contrast with the hard and artificial platforms.

The concept develops through two phases.
The first phase will offer a basketball pitch, a boules court/sand pit and a platform that functions as a performance stage. The planted areas will be a mix of spontaneous vegetation as well as formal plants in order to relax or exercise. There will be space for a beer garden, flea markets and other social activities.
The second phase will add a water feature as well as additional platforms for seating and activities. More green areas will provide the opportunity to plant trees and create a vegetable garden.
The yellow observation hut will serve as home for the bees. 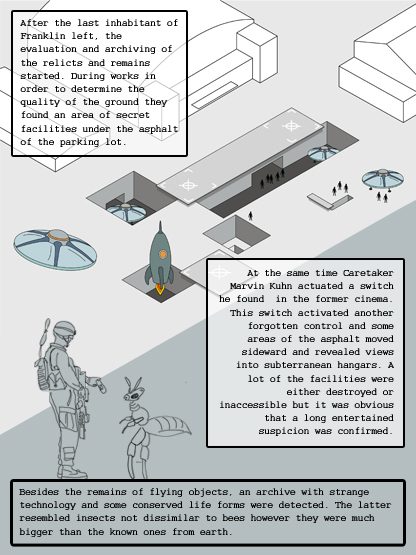