Curator Deborah Smith has juxtaposed a selection of Arup projects from 2015 for the Art and the Built Environment Exhibition with works by artists that relate to the themes in different ways.

The exhibition design with its identify establishing string curtains unified the space and became a filter and a backdrop for the diverse pieces of art and engineering. It neutralized the eclectic lobby space by filling the exhibition area with one large volume where different zones have been subtracted for the work on display. This was created by using more than 500m of white string curtains, hanging in a dense grid of rows from the ceiling which had been cut out to substract the zones.

The permeable volume was representing the city in its entirety and the artefacts within acted as examples of the complexity of our build environment today which was to be explored. 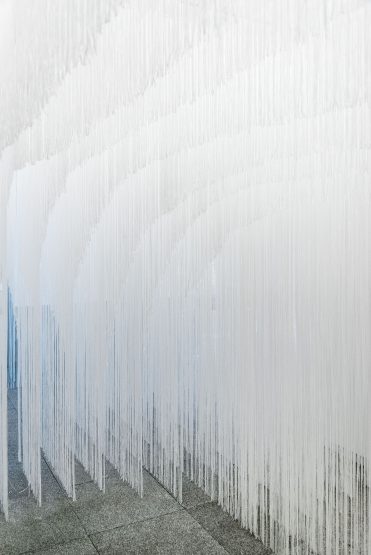