The city centre of Tilburg is predominantly a pedestrian zone with shops and cafes
at ground floor level. Spaces which are not containing those functions seem to be
overlooked and only used to rush through. The connection between Koningsplein and Paleisring is such a transition space. It is framed by the back of a Library on one side and partly windows of a furniture store on the other.

To slow down pedestrians and giving them the  possibility to use the city in a different way than consuming the concept introduced a „sleeping policeman“. Deriving from the controlling traffic element for cars it is a bump which uses the typical warning colours of yellow and black.

The proposal also considers the neighbouring building functions, therefore sofas or reading chairs as well as a book shelf have been build in place and an existing street lamp has been incorporated. These elements gave the pedestrians the possibility to have a rest, read provided books and newspapers or socialise thus becoming part of the artwork. 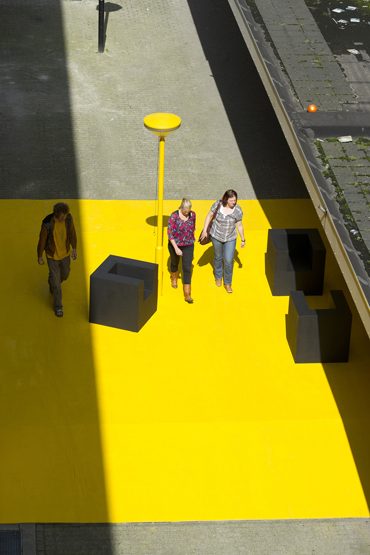