Traditionally the nature of play has been determined by stimulating imagination in a physical space. Within our modern society the world of games and play becomes more and more virtual in itself. It is dominated by computer games, motion sensory games as well as phone and pad applications (Apps).

Ball App aims to merge the two worlds together transferring the virtual games and plays into the playground of the real world. Apps such as Pipeliner (Sliding), Adrenaline Junkies (Climbing), Crazy Rotater (Turning) or Wipeout (Tilting) can be explored with Ball App, a three dimensional game application that encourages the user to play and interact with the object as well as with the other users. Some apps represent a personal challenge; others are dependent on teamwork or counting on interaction between the players.

As with any virtual gaming platform, the design of a new play object has to look cool and beautiful to attract. At the same time it should appear mysterious or cryptic, it should invite to discover and to challenge; therefore it motivates to take risks and to experience the physical as well as the physics. 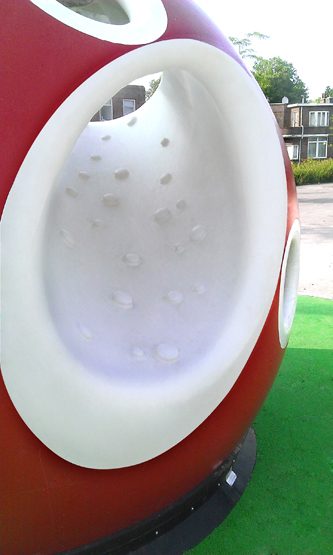