Students from Karsten Huneck’s MArch Unit USE (Urban Spatial Experimentation) of the Manchester School of Architecture investigated the nature and the potentials of Newman Passage through proposing interventions within the whole Passage as well as utilising KHBT’s studio building and developing spatial strategies for future proposals for Newman Passage.

The incredibly rich setting of Newman Passage makes it an ideal backdrop for film and photography shootings as well as appearing in novels and other literature. George Orwell and Thomas Dylan were regular at the Newman Arms Pub that forms one entrance into the Passage and the Pub also appeared in their novels. The small alleyway was also the backdrop for the famous film Peeping Tom that was shot here in 1959. Well-known artists and creative lived and work here and Archigram’s first office appeared to be in Newman Passage as well. Large groups appear frequently for activities such as Geocaching and Pokemon and London Walking Tours have the Newman Passage regularly on their itinerary.

As part of FAVORITEN Theater Festival 2016, they presented their spatial research and practice projects in an exhibition and in the form of a tour. The works by the urban pioneers from Manchester ranged from small interventions to suggestions for larger urban development strategies: including an action where parts of a building can be duplicated with the help of flexible aluminium plates parts, to an app that allows people to use shops and other commercial spaces for entirely different purposes outside of opening hours.

Installation for a Catwalk Show for new Hat Designs

Making Headway has been the catalyst for lots of new collaborations. Students at Manchester School of Architecture have been working with us on a live brief to create an installation which acted as a backdrop to the catwalk show in St Mary’s Church.

The project brief required the students to use Stockport’s hatting heritage as a starting point for their designs. Groups of students developed their design ideas and made their pitch to a judging panel. The project shown is the successful design which came from Pascal Robin Loschetter and Erika Mikulionyte and all of the students have been working together to create this installation made of more than 10 000 paper hats.

Workshop and Installations with Students of FH Dortmund

50 Students of the Scenography department of the FH Dortmund have been developing concepts o the topic of light art in the urban context. As part of a seminar the practical aspects of a realisation have been combined with a theoretical research of the effect of light and space.
A jury of various experts chose 5 projects which have been realised afterwards in the city of Unna.

The selected projects showed an enormous variety of aspects in regards light in an urban context and all other works have also been exhibited in the Lichtkunst Zentrum of Unna. The 5 winning works have been realised by the students itself under our supervision with a maximum budget of EUR 5000 each.

Intervention with Students of ESA and MSA 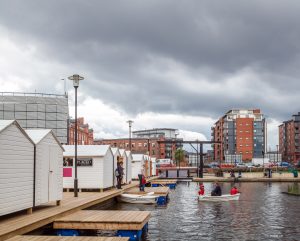 Called Atelier[zero], a project curated by Jane Anderson and directed by Office for Subversive Architecture (KHBT) this contemporary art installation was the product of a competitive process carried out amongst students from the Manchester School of Architecture and the Ecole Speciale d’Architecture of Paris. This partnership was a unique collaboration to celebrate the 2012 Cultural Olympiad.

Throughout the duration of summer 2012 Piccadilly Basin has been transformed into a platform which encourages creative use of public space. This unique intervention brought together 13 purposely designed Olympic huts, along with 6 rowing boats docked in the basin and a collection of ball games, including basketball, tether ball and a free-kick spot integrated into the site’s street furniture. The Students were developing proposals as part of a competition where 3 schemes have been chosen to be implemented on site. The projects were then carried out through all stages by the students simulating the processes of larger architectural projects and they even built the schemes on site physically.