The void is the central element of the Guggenheim Museum. The impressions of this gigantically „empty“ space and the view to the surrounding spiralling ramps leave by far the greatest impact on the visitor.

Does this spatial impression support the exhibited artwork or is it actually a conflicting, the art overwhelming element? Most of the visitors rather visit the building than the displayed art work.

Our proposal for the temporary transformation is to detract this immediate perception of the void. How can we take away this “empty” space?

Another very obvious but different element is part of the proposal. The merchandising of cultural institutions is growing more and more and in the case of the Guggenheim it has been developed to a level where the iconic building becomes an object used for almost any possible product and the obvious one is the coffee cup. For our proposal it is very important but also disconcerting to see how the “unique” piece of architecture becomes a repetitive product which at the same time also supports the institution by additional funding which means it also can evolve further.

The void will be completely filled with coffee which means the space is no longer experienced as such, only the first few centimetres can be seen in depth. The title macchiato is the synonym for coffee as well as it means stained which one could argue happens to this fantastic building of Frank Lloyd Wright by literally filling coffee into the real space and also  using it for the banal commercial use.

The temporary removal of the void will be a powerful experience which somehow dictates a restriction to the visitor which results in an enormous urge to finally see the void again after its removal.

The building finally will be recharged with its real value. 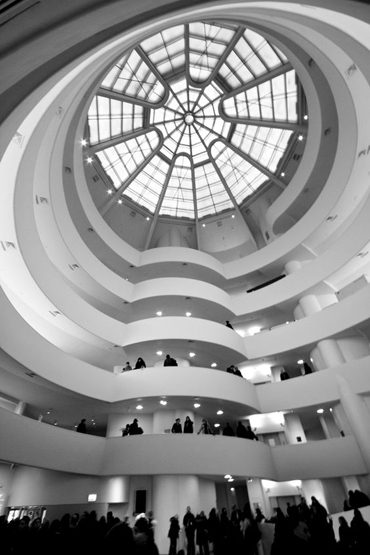